The biggest, most in demand hit songs in the chart.

It’s been reported this week that 236 UK Cypriots have died in relation to Coronavirus.

The weekly Parikiaki newspaper which has continued to print it’s circulation during the pandemic have been providing regular updates.  The latest figures were published as of 22nd April 2020, however it is not known whether the deceased have died directly from Coronavirus or whether they had tested positive for the virus, but died of other causes.

The newspaper has contacted hospitals, churches, funeral directors, Turkish Cypriot media and community, plus requests for their weekly death announcements, and confirmed 236 UK Cypriots have died, with 36 deaths of UK Cypriots in the past week.

According to Parikiaki’s calculations the deceased are as follows:-

All of the above are from the London area with 5 additional UK Greek-Cypriot deaths in Birmingham, 3 (from the same family) in Weston-super-Mare, 1 in Southend, 1 in Luton, 1 in Cheltenham, 1 in Lowestoft, 1 in Derby, 1 in Cambridge and 1 in Liverpool.

Cyprus currently has 795 cases of positive tests for Coronavirus with 14 deaths and so far, 98 have recovered from the disease, (just over 12%).

The 2,754,506 confirmed worldwide cases represents 0.035% of the world’s population who have been diagnosed with Coronavirus.

London Greek Radio (LGR) expresses our sincere condolences to the families and friends of all those who have sadly died during the pandemic and continuing to work with various organisations to help and support our communities at this challenging time.

John Kyriakides, Chairman of LGR said, “The LGR family are working hard to keep listeners informed, entertained and updated during this unprecedented time. I am saddened to hear of so many deaths in our communities.”

Tony Jay, Managing Director for LGR added, “LGR will continue to promote cross-partnership initiatives to help our listeners and communities. Our work to communicate the help that is available is more important than ever because we all have a role to play in fighting this virus.”

London Greek Radio – working together with partners, businesses and organisations to support our communities.  #StayHome#SaveLives#StayTuned

RECIPE OF THE WEEK

LGR has teamed up with restaurateur, George Psarias, who has nearly 40 years of cooking experience to bring you a recipe every Wednesday for you to try one evening this week!

Tune in for Drive-Time 4-7pm with Tony Neophytou every Wednesday to hear George’s latest recipe!

CORONAVIRUS: THE DUNKIRK SPIRIT – REAL OR JUST A NOSTALGIC ILLUSION?

The increasing daily death toll from Coronavirus has stunned the nation. The pandemic has caused widespread disruption to jobs, family life and individual liberty. Our Prime Minister, Boris Johnson, is currently fighting this dreadful disease.

The media and politicians alike suggest that we will need to call upon ‘The Dunkirk Spirit’ to see us through the crisis. It was said that the “Yorkshire flood victims showed the Dunkirk Spirit as they battled the rising water”. However, what does this really mean?

A brief look at the history does at least give us a startling perspective.

The renown historian, AJP Taylor famously wrote, “Dunkirk was a great deliverance and a great disaster but it might simply have been a great disaster”. Put bluntly, had Hitler not halted the advance of his Panzers at a critical point during the allied retreat, the miracle of Dunkirk would not have been possible. The term ‘Dunkirk Spirit’ would not exist.

Hypothetically, under these circumstances, “Dunkirk Capitulation” is a more appropriate epitaph as it is likely that the whole area would rapidly have been transformed into a giant POW cage.

As we know, for reasons which have never been convincingly explained, Hitler did halt his tanks, allowing the British and French to build a defensive perimeter around Dunkirk making mass evacuation possible.

More than three-hundred thousand British and French troops were evacuated from the beaches of Dunkirk.  But make no mistake – this was a collective effort.  A brilliant feat of improvisation from our forces supported by a selfless rear-guard action from troops on the ground, notably the defenders of Calais and the French 12th motorised infantry division.

However, not everyone behaved as heroes and, like today, although most are observing social distancing, but not all, back then, some service personnel / civilians behaved selfishly.

Recently, Scotland’s chief medical officer has resigned after making two trips to her second home during the coronavirus “lockdown”.  The chief medical officer had fronted television and radio adverts urging the public to stay at home to save lives and protect the NHS.  However, it is the majority that create a collective spirit, not random individuals.

In 1940, private boat owners volunteered themselves and their vessels, (often just pleasure craft), to help with the evacuation. Their contribution was critical and is regarded, rightly so. with great pride. No doubt, in time, memories of the volunteers prepared to risk infection for the greater cause during the Coronavirus will attribute similar status.

After Dunkirk, Winston Churchill reminded the public, “wars are not won by evacuations”, but added, “there was a victory inside this deliverance which should be noted”. From this platform, based on a common spirit of defiance, Churchill was able to galvanise a nation to defend itself against invasion.

Of course, to varying degrees, this spirit was evident during the threat from the Spanish Armada and later Napoleon, although modern communication was not available then so the message would have taken time to circulate. Churchill had radio. Today our leaders have satellite TV, the internet and social media.

It is often said that the British are at their best when their “backs are to the wall.”  There is truth in this. Unlike our cousins across the pond, we champion the underdog, celebrate near misses, honourable defeats, resistance against all odds, rarely sublime victory. At the defence of the mission-station at Rorke’s Drift, which was a courageous, yet defensive engagement, the ‘hero’ status was accorded to Captain Scott after failing to reach Antarctica ahead of his biggest rival.

Our sentimental attachment with the Second World War is another factor. A couple of weeks ago, H.M the Queen made a rare televised address to the nation in which she called on the country to “remain united and resolute”, and echoed the words of Dame Vera Lynn’s wartime anthem, when she said “we will meet again.”  I can’t imagine other world leaders resurrecting our memories from the war to boost morale.

We are told hundreds of workers in small laboratories across the UK are working to create a 21st century flotilla of little ships to avert Britain`s threatened Coronavirus Dunkirk by testing the nation’s frontline NHS workers. This is truly uplifting, but is it really a version of the Dunkirk Spirit?

I believe this reaction to be a trait which is intrinsically British, but not exclusively so. “Lest we forget” the Spartans gallant stand at Thermopylae against overwhelming odds, or the French defenders at Verdun.

We may very well be a softer society than the one our parents or grandparents inhabited, but our current plight and capacity to endure should be measured against our world of 2020, not 1940.

I joined in the hand-clapping for National Heath /social workers which, although pre-ordained by the media, showed the very best of British.  In my street, (Heywood Road, Harrogate), people came together in a simultaneous act of appreciation. Whole families clapped and cheered, not only out of respect, but there was a real sense of ‘we are in this fight together – we will beat this disease together.’  Other countries have shown their appreciation in similar ways but it is unusual for the British to embrace a collective emotional outpouring of this kind.

We may very well still be influenced by past glories perceived or otherwise, but our special spirit remains intact.  Whether this is a British characteristic or the Dunkirk Spirit remains to be seen, but it is nevertheless, something we will be increasingly reliant upon in the months to come. 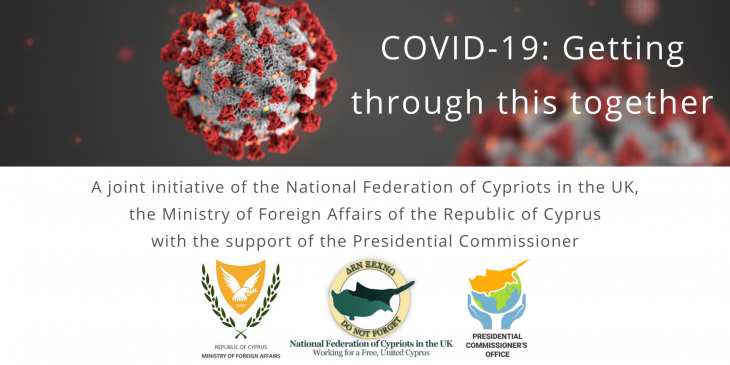 We will continue to update this page, so if you know a service that we should be including please let us know, by email: enquiries@cypriotfederation.org.uk. Also, subscribe to our mailing by clicking here to get our regular updates.