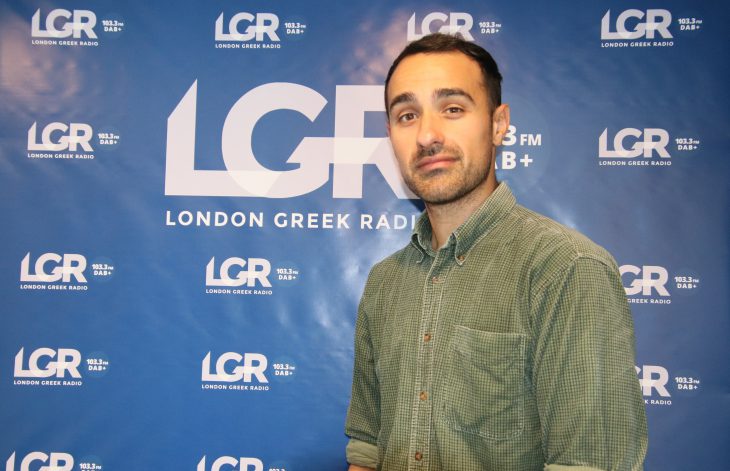 Stath Lets Flats, Channel 4’s British-Cypriot comedy, written by and starring Jamie Demetriou, is to return for a second series this month.

The loosely-coined “British-Cypriot comedy” is a lot more than the sum of its parts; its far less indulgent about portraying Greek-Cypriots, or the “community” for that matter.  This may be because all of the action revolves around the off-beat, quirky characters [a lot of whom are non-Greek-Cypriots].

The six-part series is a lovely take on the ‘madness’ of the current property market, with the ensemble cast ‘explaining’ it. Jamie said, “The community [Greeks/Cypriots] has a different way of putting it; I think it’s characters… are flamboyant, wonderful, funny, caring characters- there all about family and love.”

During a visit to LGR, Star-of-the-show, “Stath” AKA Mr Demetriou said, “London Greek Radio has been playing in my house since I was a foetus”, noting LGR’s long-time role in celebrating Greek-Cypriot music and culture.

The siblings are hoping that the audience will find it relatable because there are a few tacit observations to what it is being Greek/Cypriot.

“We are on London Greek Radio and I think that’s so relevant because so many have made a life here, and they’re Londoners so the character of Stath encapsulates it. He talks in a London accent with a bit of a ‘Greek twang’ to it, which a lot of people have, and I hope a lot of people can relate to that.” Jamie told listeners.

The second series will also see a return for Katy Wix who will reprise her role as Stath’s infuriatingly competent colleague Carole, with Alastair Roberts as his more amenable colleague, Al.

The action will pick up from where we left it at the end of series one with Stath having been denied the manager’s position by his own father.

In series two, he and the rest of the team will be forced to work under his arch rival Julian (Dustin Demri-Burns) – and re-think his life goals. Sophie will be searching for a new direction after failing at Dance College and publicly denying her feelings for Al.

Fiona McDermott, Head of Comedy at Channel 4, said: “We did originally say no to this, but he just kept turning up, trying to get into the building.  Sometimes it’s just easier to give in isn’t it?  In all seriousness, we’re thrilled to back Jamie and this gem of a show again.”

Ash Atalla, the managing director of Roughcut TV which makes the show, added: “So happy to be going again on Stath Lets Flats. Jamie is a star. And we’ve all felt the pain of terrible flat viewings, so this is our revenge.”