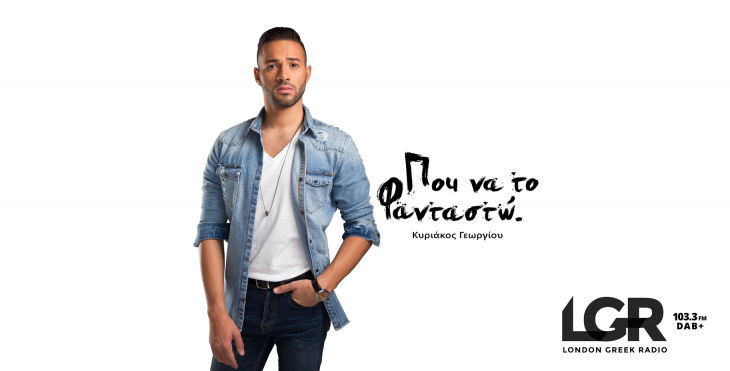 Anyone following his career would know that London Cypriot-born singer Kyriacos Georgiou has been enjoying huge success in Greece and a few other countries.

With the release of his new single ‘Pou Na To Fantasto‘, London Greek Radio caught up with Kyriacos exclusively to talk about the song and his summer tour.

The track is “a summer vibe Greek-pop Laika single” according to Kyriacos with an upbeat, and catchy sound, about the blossoming of a summer romance. The opening verses start with the singer’s reflective thoughts about losing their “mojo”, that suddenly changes once he encounters this person, as love sprinkles a little magic.

The song has already gone straight into the London Greek Radio playlists.

Composed by Lefteris Kintatos, a songwriter in Greece at the top of his game; he has several hits under his belt for Konstantinos Argiros, with songs ‘Ti Na To Kano’, ‘Sti Diki Mou Agkalia’ and ‘Oso Niotho’.

Kyriacos said, “He is one of the biggest Greek hitmakers right now. I am absolutely thrilled that he composed a song for me.”

Last winter, Kyriacos supported and performed alongside Natasa Theodoridou, Petros Iakovides and Stan in Thessaloniki and in Athens.

He visits Limassol, Agia Napa, and the Cypriot capital Nicosia for the Beer Festival in September, in the Cyprus leg of his tour.

Kyriacos is currently engaged in career-boosting talks with bouzoukia bosses, to confirm exactly where his performances will be for Athens and Thessaloniki this winter.

Tune in to LGR for all of the latest, and greatest summer sizzlers on 103.3 FM, DAB+ & via lgr.co.uk