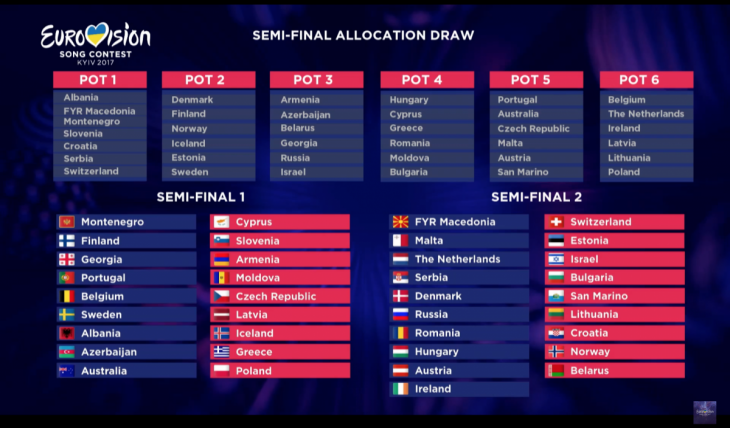 The Eurovision Semi-Final Allocation Draw carried out on 31st January, at the Column Hall of Kyiv City State Administration, in Ukraine, officially launched the start to Eurovision season.

The Cypriot and Greek entry performers have been drawn to sing in the First Semi-Final of the Eurovision Song Contest 2017, airing on Tuesday 9th May live on BBC4 at 8 p.m. GMT.

We last visited Kyiv in 2005, that proved absolutely one of the best Eurovision song contests ever, with Elena Paparizou’s song ‘My Number One’ which won the Eurovision, bringing the only Greek victory in the competition.

The Semi-Finals will span Tuesday 9th May to Thursday 11th May concluding with the second semi-final, on that occasion. The Eurovision Final will go out live on Saturday 13th May at 8 p.m. GMT to be held at the Kyiv International Exhibition Centre (IEC).

Cyprus and Greece is amongst 18 countries, conclude the first semi-final. How it works really… The Top 10 qualifiers who pass the round in each allocated semi, with 50:50 Tele-voting, and professional jury points. The semi-heats producing our lucky 20 qualifiers on both Tuesday and Thursday will be entered in the live final.

The 37 Semi-Finalists have been allocated into six pots, based on historical voting patterns as calculated by the contest’s official tele-voting partner Digame. Drawing from different pots helps to reduce the chance of so-called neighbourly voting and increases suspense in the Semi-Finals.

The UK, Spain, Germany, Italy, France, and host’s Ukraine thanks to Jamala’s winning song last year are direct finalists. The Big 5 has that upgraded status, as Eurovision’s biggest financial contributory members to the European Broadcasting Union, organisers of the Eurovision.

Hovig aka Hovig Demirdjian will represent Cyprus in Kyiv, internally selected by the CyBc broadcaster. He is a Cypriot pop singer with over 10 year’s music career; he went all the way to the live shows of Greek X-Factor in 2009, and has never given up on his quest to represent the Cypriot flag at the song contest. He will sing our Cypriot tune called ‘Gravity‘, composed by Swedish producer Thomas G:Son. His song has a Eurovision feel and potentially radio-friendly hit song, suggests the song-writer.

The official video is due to be released in March and we can’t wait to get our hand on it to share it with our listeners on LGR and through lgr.co.uk.

Demy aka Demetra Papadea will be the Greek representative, with her tune due to be separately selected by the tele-voting public, on Monday 6th March 2017. She has three songs exclusively written for her by the Eurovision legend Dimitris Kontopoulos with creative staging director Fokas Evangelinos, our dynamic team.  So what happened, Dimitris and Fokas appointed Demy, suggesting she was the best choice to the powers that be that’s how we have Demy, to fly the Greek flag to make a strong come-back to Eurovision this year…

She is signed to the Panik Records family, with a substantial volume of pop hits.

This year’s Greek trio is dubbed the ‘dream team’ surely working very hard to come up with a competitive song. Dimitris and Fokas, have a long illustrious run in the song contest with many Top 10s including Sakis Rouvas, to Sergey Lazarev, Russian entrant in 2016’s Eurovision Song Contest, finished Top 3 on finale night.

The viewers in the United Kingdom are able to vote for their favourites in the first semi-final, airing on BBC 4, so too, Italy and Spain. Meanwhile, Germany, Ukraine and France are voting in the second semi-final of Eurovision on the Thursday evening.

This year’s ‘Celebrating Diversity’ theme will define Kyiv Eurovision welcoming 43 countries, to the annual music event. Executive Supervisor of the Eurovision Song Contest, Jon Ola Sand said: ”The notion of celebrating diversity builds on last year’s theme of ‘Come Together’ and is at the heart of Eurovision values: it is all-inclusive and all about countries around Europe, and beyond, joining together to celebrate both our common ground and our unique differences, as well as the love of great music”.

The running order will be determined by the producers of the show and approved by EBU’s Reference Group in mid-March.