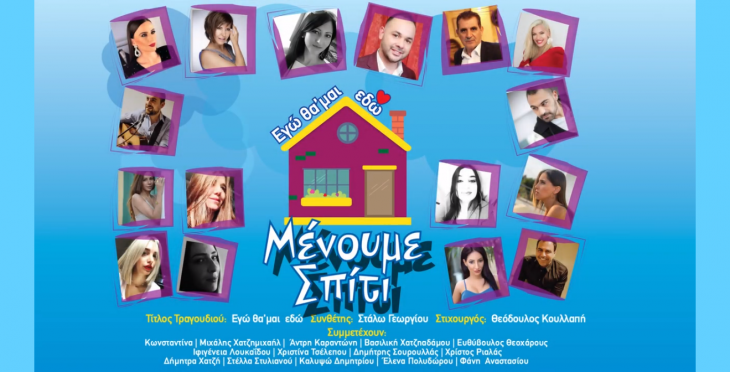 A whole host of Cypriot artists have united to create a music video especially for the island during the coronavirus pandemic.

The video was made in response to the Cyprus Government’s lockdown measures which were vigorously enforced for several weeks.

“Ego Tha’ Me Edo”, which translated into English is “I’ll be here” is a sweet melodic number which was filmed at artists homes as the country stayed home to reduce the spread of the virus.

Stalo Georgiou, a former Music Director at Manor Hill Greek School in Barnet, who now lives in Paphos, composed the music. Theodoulos Koullapi wrote the lyrics and filmmaker Charalampos Charalampous was responsible for the editing.

Stalo Georgiou, the organiser of the video, told LGR that she became involved because she was particularly concerned about the morale of Cypriot citizens who were staying at home.

She added that the video was important creatively as a vehicle to boost morale and put in place a positive mental-mind-set at these uncertain times.

Stalo said: [Translated] “The concept envisaged was to creatively seek a positive message of love and optimism. The other intention was to honour the essential workers battling on the frontline to defeat the coronavirus epidemic. The song’s lyrics underlined that we are here for each other in lockdown, also crucially to stand together afterwards when this is eventually over.”

Watch it here at our videos section: lgr.co.uk/videos