Tune in to LGR 103.3 FM and lgr.co.uk to hear the best new music, and lots of your top-rated favourite songs this month.

Listen to snippets from our chart: lgr.co.uk/chart/

London Greek Radio (LGR) has recorded a huge increase in listening figures during the coronavirus pandemic.

Along with other local, commercial and BBC stations across the UK, whilst some stations have reported double-digit increases in online listening in recent weeks, LGR has seen our figures more than triple!

London Greek Radio has recorded a significant increase in connected radio listening, with an average increase of 173% with the most notable growth over the Orthodox Easter weekend of 346%.

The figures suggest that people staying at home due to the coronavirus pandemic seem to be listening to more radio rather than listening to music apps.

The numbers are from LGR’s online streaming platforms. Some of LGR’s biggest increases have been especially noted across morning and daytime programming – which suggests that people are keeping devices on when they would normally be heading out to work.

Pierre Petrou, Head of Programming for London Greek Radio said: “LGR has been the backbone for our communities for over 30 years and provides companionship and friendship. As a result, solid relationships are formed between the listener and presenter on the radio. During this crisis, our presenters aim to inform, update and entertain.

He added, “We have developed systematic programming which includes regular live updates from Cyprus, Greece and the UK. Understandably, our regular schedule has changed but it seems that people are welcoming this as we are working in partnership with organisations who are providing essential key services to the most vulnerable – from free food packages to ‘a listening ear’.

“We’re also aware that calls, texts and emails have increased, so I think there is a bit of a general rediscovery of radio and how important it can be at times like this.”

Siobhan Kenny, CEO of Radiocentre, the industry body for commercial radio, said: “As the UK acclimatises to a new world of working from home and enforced isolation, radio proves its strength as a hugely valuable source of information, reassurance, company and, most importantly, fun. As one of the most trusted and accessible forms of media, it is perhaps no surprise that so many are tuning in right now.”

The biggest, most in demand hit songs in the chart.

The LGR Airplay Chart this month.

The LGR Airplay Chart this month.

Listen to your favourite music choices tune in to LGR!

This month’s popular Greek song’s on LGR culminating in the final month, December of 2019.

LGR is celebrating Greek music and creativity on the air-waves.

This year, was no doubt brilliant for Greek music, our chart shows a few of our timeless festive favourites, to current choices, and new releases this winter.

The best new music, latest and greatest Greek hits… tune in to LGR! 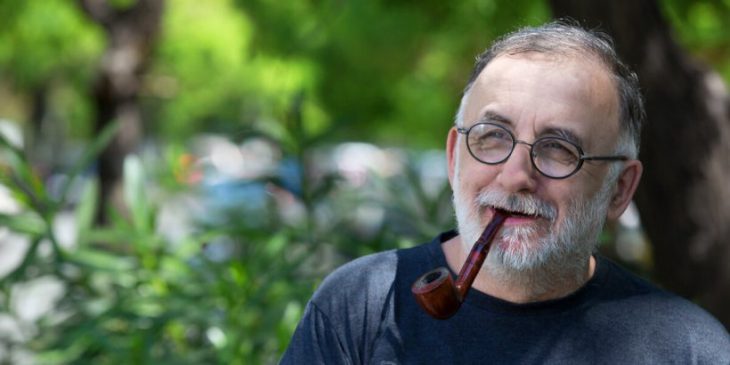 Acclaimed Greek composer and former politician Thanos Mikroutsikos has died at the age of 72.

He was considered one of the most important composers of the recent Greek musical scene.

Mikroutsikos died at the Athens’ Metropolitan Hospital where he was treated for cancer. The hospital announced his death on Saturday evening.

He is the older brother of Andreas Mikroutsikos, who is also a musician/composer and a television show host. His wife is children’s author Maria Papagianni, whom he married in 1996.

He studied piano in the Philharmonic Society of Patras and in the Hellenic Conservatory. In addition, he studied Mathematics in the University of Athens.

He began composing at the end of the 1960s but only officially debuted in 1975, with the release of his album Politika Tragoudia (‘Political Songs’). He continued on this compositional path, setting to music the poems of Giannis Ritsos, Vladimir Mayakovsky, Manos Eleftheriou and Bertold Brecht, among others.

His album, Stavros tou Notou (Southern Cross), set to the poetry of Nikos Kavvadias, has been one of the musical landmarks of modern Greece.

He has worked with many renowned singers such as Maria Dimitriadi, Haris Alexiou, Manolis Mitsias, Dimitris Mitropanos, Vasilis Papakonstantinou, Christos Thibaios and Giannis Koutras, among others.

His music has been particularly well received and recognised in Western Europe. During his career, he has managed to liberate the form of Greek song, adding together elements from the modernist and classical western tradition. He also experimented with the combination of tonal and atonal sounds and with morphological variation.

He has been involved in Greece’s political life since the 1960s. During the turbulent years of the military junta (1967–1974), he was persecuted by the regime for his anti-dictatorial activities and ideas.

Mikroutsikos’ funeral will take place at 2:30 pm (local time) on Monday at Athens’ First Cemetery, in a civilian ceremony, per his wishes.

These rankings are based on radio airplay detections as measured by ‘UK Airplay Chart’.

Tune in to LGR to hear the latest and greatest Greek hits and the best new music.

Tune in to LGR to hear the latest Greek hits and the best new music, promos, exclusives