The monastery of Apostle Andreas, in the Turkish occupied Karpass peninsula, will be delivered to the pilgrims next month.

Greek Cypriot co-chairman of the Technical Committee on Cultural Heritage, Takis Hadzidemetriou told CNA on Monday that the first phase of the restoration of the once derelict monastery is near completion and the monastery will be handed over to the Committee chairmen on 20th October, during a grand ceremony. The saint`s feast day is celebrated on 30th November.

The icons were thoroughly cleaned and the inside of the church and the pulpit have been completed, said Hadzidemetriou and the project will be handed over to the Committee during a ceremony on 20th October at the monastery courtyard.

On 17 September 2013 UNDP-PFF signed two contribution agreements worth € 2.5 million euro each, respectively with the Church of Cyprus and the Evkaf Administration (responsible for Turkish Cypriot properties) for the Restoration of the Apostolos Andreas Monastery.

The restoration of the monastery, according to UNDP, intends to contribute to the on-going confidence building process between Greek Cypriots and Turkish Cypriots within the context of cultural heritage preservation and protection. The overall restoration of the Monastery will take place in four phases.

The icons were kept at a temporary hall which was turned into a chapel for pilgrims and is under the watchful eye of Father Zacharias Georgiou, who has been looking after the monastery, to the extent that he could, since the 1974 Turkish occupation.

The Monastery is situated on the north-eastern point of the island, bears the name of Apostle Andreas. A landmark for the faithful Greek Cypriots who would often travel for up to two days to reach this holy site, the monastery was the victim of neglect since the 1974 Turkish invasion and occupation of the island`s northern third.

Hadzidemetriou described the completion of the first phase of the project as an extraordinary event and said the people are welcome to attend.

Work on the first phase began in autumn 2014.

Apollon of Limassol achieved on Sunday a great victory against AEZ Zakakiou with 4-0 for matchday 3 of the Cyprus League.

At the same time, Anorthosis defeated Aris with 2-1 in Limassol and Ermis of Aradippou defeated Anagenisi Deryneias with 1-0.

On Saturday, APOEL achieved an away victory against Nea Salamina with 4-0, AEK defeated Karmiotissa with 3-0, while the match between Omonia and Doxa in GSP Stadium ended in a 1-1 tie.

Match day 3 concludes on Monday with the match between AEL of Limassol and Ethnicos Achnas. 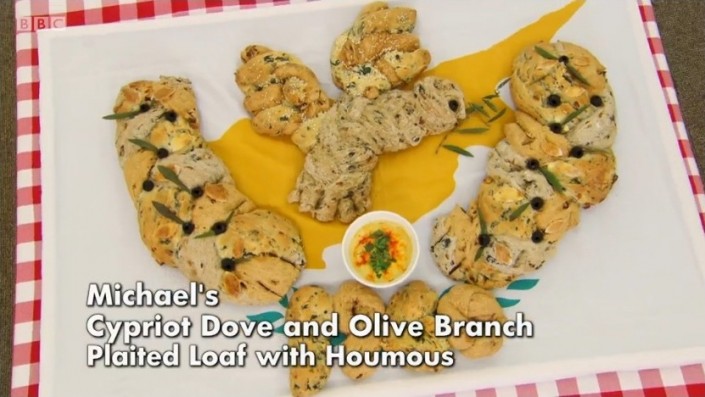 Michael Georgiou leaves the ‘Great British Bake Off‘ but not before giving us a very Cypriot baking twist to this year’s popular television programme on BBC1 on Wednesday night.

The 20-year-old British Cypriot, who studies politics and economics at Durham University, was born to Cypriot parents in London. His grandparents from his father’s side come from Leonarisso, Koma tou Yiallou and from his mother’s side from Kellaki in Limassol.

The very likeable contestant has every reason to be proud since he had beaten off 12,000 applicants who applied to be in front of our shows on the weekly show.

The first show aired on August 24th was when we met Michael in this year’s line-up of 12 amateur bakers.

Michael brought his Cypriot touch to his baking skills…

He baked and smiled throughout, clearly very pleased to be part of the very exciting, completely competitive, but extremely good spirited format.

Thank you for the kind messages. Was an incredible experience and loved every moment of it #GBBO

Michael told viewers, ”The bake I went on meant a lot to me, it was quite sad I went on that… I’m going to be letting my mum know first, she’s been the one with me since the start, she’s still going to be proud of me, happy I got this far.”

Michael gave us a Cypriot treat by way of ‘Michael’s Cypriot Dove and Olive Branch Plaited Loaf with Houmous’ in the bread challenge, and we even got to see a Cypriot flag! Really making the point he is definitely Cypriot and is proud of his roots.

However it was Judge Paul Hollywood that was a little less keen on what he perceived as not enough use of coriander, in what is primarily an olive, coriander and onion based loaf.

Michael’s little alcohol enticement to get the judges on side gave us a stand-out moment in the series so far, very LOL!

Well, if you haven’t seen it yet, judge Hollywood literally spluttered after trying a shot of strong Cypriot liquor Zivania and he might not be trying it again any time… soon…

Hollywood gave the departing baker some strong words of encouragement.

”I would like to see Michael carry on doing what he’s doing, he’s a great baker actually, and he’s a nice lad as well.”

In statements to the press after his meeting on Tuesday with Akinci, in the framework of the UN-led negotiations on the Cyprus problem, and asked if his meeting with the UNSG and Akinci in New York has been arranged, President Anastasiades replied “not yet but deliberations are underway.” He said that the joint meeting of the two leaders with the SG will probably take place on September 26.

Anastasiades said that during his meeting with Akinci on Tuesday they discussed Cyprus problem chapters including those of the economy and EU affairs. Replying to a question, Anastasiades wished that the difficult issues they will face were as easy as these two chapters. Asked why these chapters have not closed yet and if significant differences are recorded, he replied negatively, noting that “there are however pending issues for which convergence is needed to close them once and for all.”

Invited to comment on information that a member of the Greek Cypriot negotiating team, Polis Polyviou expressed disagreement and resigned from the team, Anastasiades said that Polyviou did not quit adding that no one is prevented from having different opinions on legal issues.

He added that today he contacted Polyviou who did not express any intention to quit, adding that there was a disagreement between Polyviou and the Greek Cypriot negotiator which is legitimate and is not the only one.

He said that there were no disagreements among the negotiating team members that led to a conflict. On the contrary, “what I`ve been pursuing is to have a productive dialogue”, adding that each member of the team can express his concerns with a view to reach a final more positive view as to how issues are being addressed.

Anastasiades noted that in many occasions some of the lawyers participating in the negotiating team have different views and suggestions and this is something quite normal, adding that the required exchange of views takes place.

He added that this is why the team which supports that negotiator comprises nine members and this helps towards forming better positions to express during the negotiations.

Asked if the two sides will exchange proposals for example on the issue of territory or the issue of guarantees, the President said that they are exchanging thoughts and concerns and not proposals in writing.

He noted that he submitted proposals on the issue of guarantees and security, but this does mean that the other side is obliged to do so based on what has been agreed. Anastasiades added that dialogue and exchange of views will continue to see if they can reach arrangements based on the fact that the feeling of security of one community must not be a threat for the other.

Ask if they will discuss Akinci`s proposal on the issue of guarantees tomorrow, Anastasiades said that he did not tell anything about tomorrow, recalling that they will have three more meetings until September 14.

He noted that they will certainly continue to exchange views and make an effort to see how it is possible for everyone to understand that modern states, especially EU member states, do not need arrangements which may be considered as guardianship of one country over another.

Asked about the dispute settlement mechanism and the issue of the foreign judge, the President noted that the negotiation is ongoing, adding that as regards the judicial authority there were concerns expressed by everyone participating in the negotiating team which he endorsed and conveyed to Akinci and which the Turkish Cypriot leaders` advisors also addressed in the same way. He added that justice is a very delicate issue.

On the contrary, he added, “it may lead to a wreckage even of the dialogue, which is currently on a good track.”

Asked if the results of the current phase of the negotiations will show if the Cyprus problem is close to a settlement, Anastasiades said it will depend from the outcome of the deliberations, adding that certainly this is a decisive phase.

He noted that given the will of both sides this phase is of decisive importance with a view to have a final outcome and achieve a settlement.