“ YOUNGEST LGR DJ, WITH THE
BIGGEST KNOWLEDGE OF GREEK MUSIC ”

Andrea started working for LGR at the age of 14, and has worked in a range of departments.

From a young age, Andrea was very musical. She grew up to the contemporary sounds of Natassa Theodoridou, Kaiti Garbi and Notis Sfakianakis as well as spending a lot of time with her grandparents listening to the likes of Mariw, Stelios Kazantzidis and Giorgos Dalaras. And so her first show on LGR was ‘Young & Connected’ on weekday nights from 8-10pm playing the latest pop and modern laika. She was later given the opportunity to start her own show from scratch, ‘Laiki Vradia’, choosing to play the older laika and rembetika. She continues to specialise in these older genres.

Andrea continues to get involved within the community wherever she can, as well as juggling her career as a lawyer. She has taught at local Greek Schools, written articles for the local Greek newspapers, volunteered at local churches and been a member of NEPOMAK.uk. 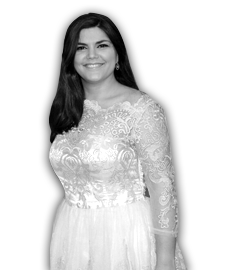